Highlights from our campaign kickoff party at Out of the Blue Too Art Gallery and More! 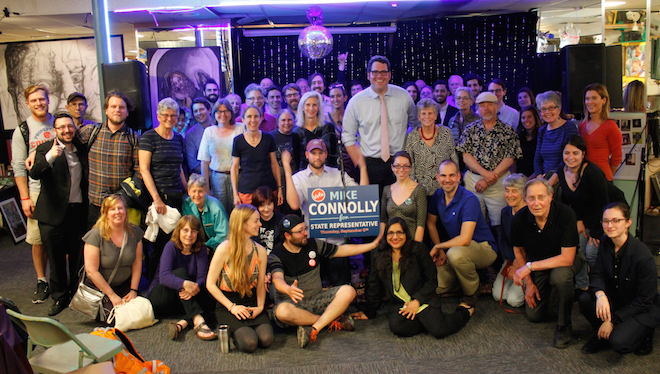 CENTRAL SQUARE, CAMBRIDGE — An overflow crowd of more than 100 friends and supporters attended Mike Connolly's campaign kickoff party at Out of the Blue Too Art Gallery and More last Thursday. 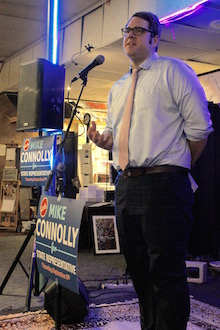 "Cambridge and Somerville are both great places to live," said Connolly, who lives on Harding Street with his wife Kacy and is seeking the Democratic nomination for State Representative in the 26th Middlesex district.

"And what's amazing is how committed we all are to doing even more to ensure that our communities remain affordable and accessible to people from all walks of life."

As State Representative, Connolly pledged that he would "work for broader investments in affordable housing, public transportation, early education and after school programs, and social services, including programs to address the heroin and opioid epidemics."

"My commitment to the community and to these issues stems from my own personal background," Connolly explained.

Raised by a single mother in public housing, Connolly benefited from a Head Start program and spent time in foster care before attending Duke University on a football scholarship. After that, he graduated from Boston College Law School and became an attorney, and over the past five years, he has worked closely with community leaders in Cambridge and Somerville.

In 2013, Connolly organized a grassroots campaign to focus Cambridge officials on a "net zero" carbon emissions plan that has since become a model for others in the Commonwealth. He was then hired to work as a legislative aide in Cambridge City Hall, where he drafted policy for affordable housing, public open space, community paths, renewable energy, and clean elections. 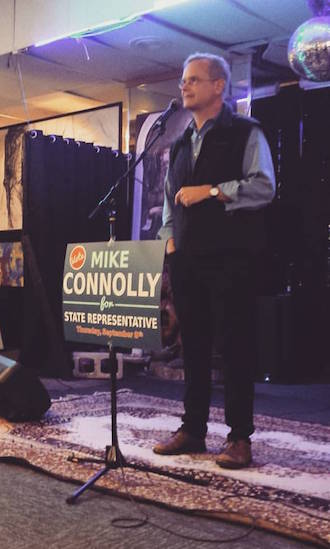 Connolly was introduced by Lawrence Lessig, Professor of Law and Leadership at Harvard University, who said "Mike stood out as an inspiration" because of his efforts to advance the cause of clean elections and his work as an advocate in the community.

"In the ten years that I have been working to reform the political system, few people who are running for office have actually inspired me, but through his work on countless issues on the local level, and with a clear focus on the need for political reform, I can say that Mike is one of the few who have truly inspired me and given me hope for the future of our democracy," Lessig said.

During his remarks, Connolly thanked volunteers who have already helped him knock on thousands of doors in Cambridge and Somerville this spring, and he also thanked kickoff co-hosts, including Cambridge City Councillors Dennis Carlone, Jan Devereux, and Nadeem Mazen, and Somerville School Committee member Lee Erica Palmer, and many other local residents.

City Councillor Nadeem Mazen: "Mike is a tireless and effective leader for our community."

While encouraging others to get involved with the campaign, Councillor Mazen described Connolly as having a "rare combination of leadership qualities," calling him a "relentless advocate for progressive causes," who still manages to be "a very likable person."

“I have been working with Mike over the past several years to promote sustainability and to ask how our communities can make substantive investments in affordable housing," said Mazen. "I support Mike’s campaign because he has proven himself to be a tireless and effective leader for our community,” Mazen added. 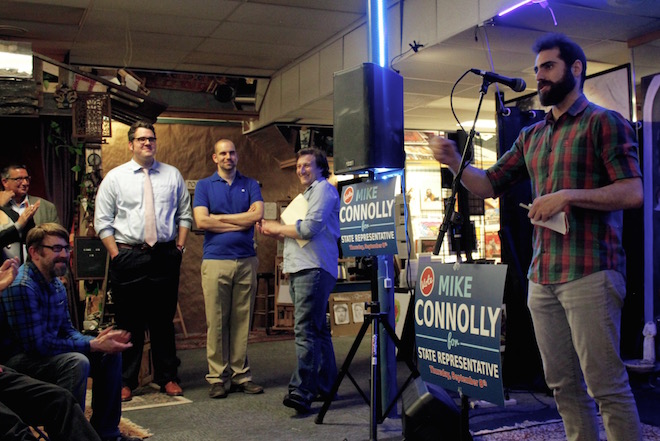 Anyone interested in getting involved or learning more about our campaign is encouraged to visit www.mikeconnolly.org or contact campaign manager Patrick Hunter at [email protected].